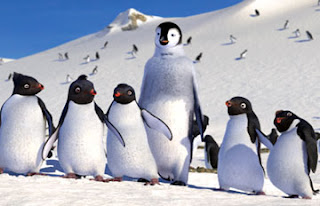 Being that I'm on leave this week, I've been spending the last two days catching up on films, with more to see in the next few days before I head back to work next week.

First off the rank was George Miller's animated epic about dancing penguins, Happy Feet. This is the story of Mumble (adequately but blandly voiced by Elijah 'Frodo' Wood), the alienated young Emperor penguin who is cast out by his tribe because he expresses himself through tapdancing instead of singing. Consequently our young hero embarks on the sort of standard hero's quest that we've come to expect in fantasy films, in search of the alien outsiders whom Mumble's believes is responsible for the fish shortage that is slowly starving his tribe.

Along the way Mumble falls in with an endearing troupe of Adelie penguins, led by the irrepresible Ramon (Robin Williams) and faces off against a truly menacing leopard seal, a small pod of killer whales, extremely Ocker elephant seals, and eventually humans, who are responsible for the food crisis.

There is, of course, a love interest, embodied by the sleek and sexy Gloria (Brittany Murphy) as well as a heart-warming message about being true to yourself even in the face of oprobium, voiced most consistently by Mumble's mother Norma Jean (a breathy and irritating Nicole Kidman).

The film suffers from feeling too episodic, and despite the animation being superb, it suffers in comparison to the work of Pixar. Both the environmental message at the film's heart, and its 'be true to yourself' ethos are awkwardly handled, and the ending especially strained my credulity to breaking point. The music (because this is a musical, of a sort) was too artificial for my liking, being so carefully chosen so as to appeal to the broadest possible tastes that it felt manipulative and contrived.

On the other hand, I'm not a child, at which demographic this film is squarely aimed at, so what would I know?
Posted by richardwatts at 5:22 pm

My 6 year old son liked the film, but I wouldn't recommend this to anyone with school-age children, or to anyone at all really. I counted about 42 songs in the credits, and it tried to hard to fit a wild medley of music into it. I thought the music was very poor - a careful blend of Video Hits and hackneyed baby boomer music.

The blandness of the landscape was over-compensated with spectacular 360-degree virtual camera angles that became boringly repetitive. There was little continuity and the inclusion of an environmental message seemed insincere and gratuitous.

The dialogue was often hard to understand, and the cuteness factor was pure treacle (sickeningly). The only thing in its favour was the CGI, but that got boring after five minutes. The film seemed much longer than it was.

Interestingly, comments on At The Movies almost universally damn this movie.

I so definately agree with you about the music in this film, Paul. It was clearly selected to appeal to as broad an audience as possible, from RnB loving teens to crusty old Boomers. Contrived and cloying to the max.